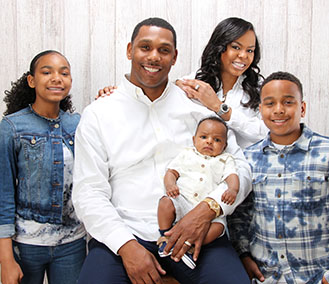 Dr. Frederick Ballard was born and raised in Baltimore, MD home of the Baltimore Ravens! After graduating from high school from Milford Mill Academy, he ventured off to the United States Army where he became a combat medic/dental assistant. During his time in the Army, he was stationed in Fort Riley Kansas, Camp Paige, Korea, and Fort Bragg, North Carolina serving in the 82nd Airborne Division as a paratrooper.

After leaving military service, Dr. Ballard attended the University of Maryland Eastern Shore, earning a Bachelor of Science in Molecular Biology. Once completing his undergraduate studies, he attended the prestigious Howard University College of Dentistry where he found his love for pediatric dentistry.

During Dr. Ballard’s time in dental school, he met Dr. George Thomas, the Chairman of Howard University College of Dentistry’s pediatric dental program, where he was groomed to become a pediatric dentist during his two-year pediatric dental residency.

​Five years ago, Dr. Ballard, along with his family migrated to South Jersey where he took a position with a large dental group and was given the opportunity to sharpen his skills and learn to become the best pediatric dentist that he could be for his patients. Through the development of a special needs and hospital dentistry program, he was able to offer complete service to all of his child/special needs patients to ensure adequate treatment.

With a continued commitment to training and service, Dr. Ballard intends to serve his patients at Kool Koala Pediatric and adolescent dentistry with the latest a greatest techniques and materials, for the highest quality results.

Dr. Ballard currently resides in Southern New Jersey with his wife Nia, daughter Jordan, son Mason, and newborn baby Raven. Spending time with family is his priority outside the office, but when given the chance, Dr. Ballard enjoys gardening, landscaping, and catching up with the Baltimore Ravens football team.